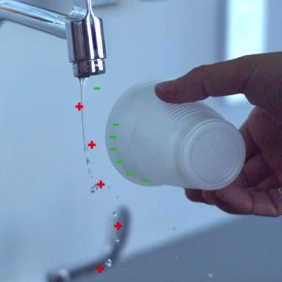 Water, a clear liquid substance that we use every day. We use it for drinking, cooking, and cleaning. Quite ordinary don’t you think? Not quite, if you look closer.
When two Hydrogen ions bond with one Oxygen ion, it creates a water molecule. But the question here is the resulted molecule magnetic? Let’s do a simple experiment to find out.

What you need for this experiment:

1.       Take the plastic cup and rub it against your hair – The faster the rubbing the more static electricity is generated

2.       Turn on the tap and bring the charged plastic cup near the running water

3.       You will see that the water appears to be bending towards the cup

Why is this so?

The reason for this cool phenomenon has something to do with the ions in the water. The ions are from minerals and other impurities in the water. When these negatively-charged ions come near the negatively-charged plastic cup, it gets pushed back up the tap and the remaining positive ions are attracted to the plastic cup. That is why the water looks as though it is bending towards the cup. Watch the video below to see the cool water-bending effect.

Though we don’t see it, electrodialysis is a crucial process in ensuring we have an adequate supply of clean water.

GE’s Water Tech Centre in Singapore has been working on water innovation treatment and the reuse of industrial wastewater for over five years. Led by Dr. Adil Dhalla, the center has become an important part of GE’s global technology organization by supporting the development of advanced technologies to help solve some of the world’s most pressing water challenges. The center has helped accelerated a significant amount of research in the water treatment industry while strengthening government collaborations around the world. With clean water scarcity plaguing the world today, it is vital for clean water technology to continue to be developed for the greater good of mankind.